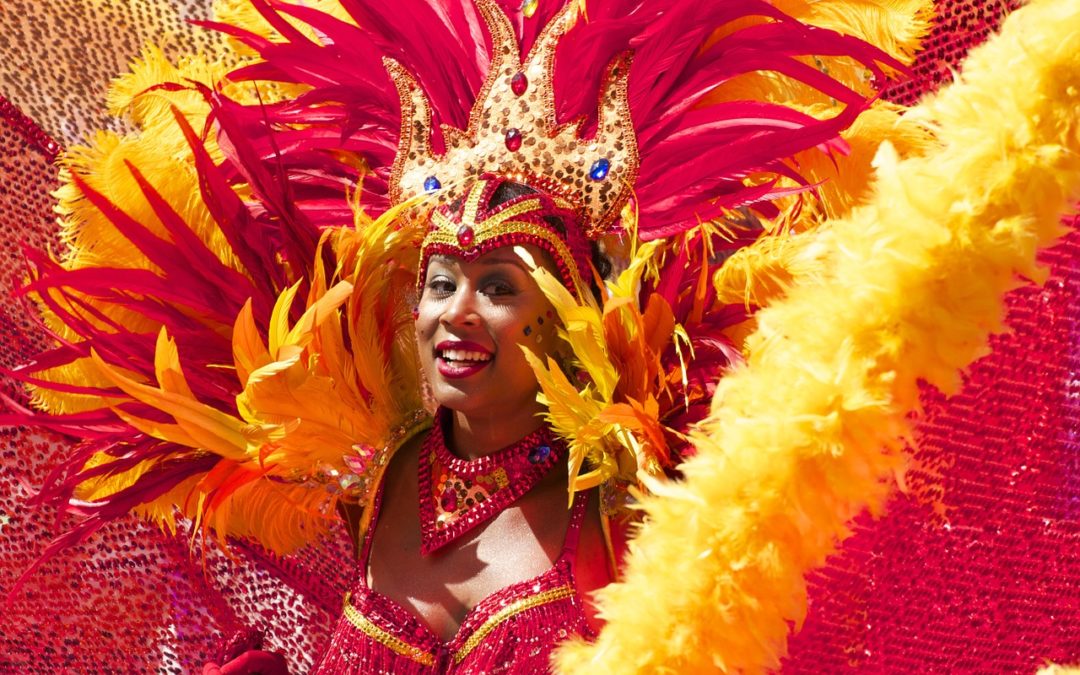 If you’ll be in town come October for this year’s Miami Carnival—and you really should be—we invite you to tuck into some appropriately Caribbean fare during the proceedings here at Havana 1957! With multiple locations to choose from and plenty of space for group dining at our restaurants, you’ll be within easy reach of our fantastic Cuban fare while you take in the sensory spectacular of one of the great Carnival celebrations in the Sunshine State.

You may be familiar with the traditional February or March window of Carnival season, which falls before Lent and sees such world-famous celebrations as Mardi Gras in New Orleans and the epic Trinidad and Tobago Carnival. Here in Miami, though, Carnival is an October affair, hitting the week ahead of Columbus Day. It’s a multifaceted, family-friendly festival with numerous events building up to the climax of Carnival Sunday.

The 2019 pizzazz gets underway on Saturday, October 5th with the Junior Carnival at Central Broward Regional Park, with a soca-fueled pageant of South Florida masqueraders 14 years old and younger and exuberant competitions for such honors as Junior Queen and King of Carnival and Junior Band of the Year.

That comes followed up on Carnival Friday, October 11th by Panorama, an outstanding steelband bonanza from 5 to 11 PM at Cricket Stadium in Central Broward Regional Park sure to get you moving and grooving.

The next day, also at the Central Broward Regional Park, J’Ouvert sets the stage for Carnival Sunday’s excitement with its “Beginning of the Day” fun. The J’Ouevert Parade features a slew of masqueraders, but instead of the dazzling costumery that’ll be on display the next day these celebrants will be decked out in paint-, dye-, or mud-splattered casual wear—and in the guise of demons and devils. J’Ouvert, which starts at 7 AM and runs to 3 PM, will also include many Caribbean arts, crafts, and food vendors.

Carnival Sunday, meanwhile, sees festivities culminate in the Parade of the Bands & Concerts, which’ll involve better than 18,000 masqueraders in many different themed bands strutting their stuff in the Miami-Dade County Fair & Expo grounds. It’s a massive affair, the parade stepping off at noon and running to 11 PM, and a 3 PM concert on the heels of the judging.

Central Broward Regional Park, host to the Junior Carnival, Panorama, and J’Ouvert, happens to be only about a half-hour from our Havana 1957 Pembroke Pines location. The Carnival Sunday excitement goes down at the Miami-Dade County Fair & Expo, an easy trip from our four Miami Beach restaurants: Ocean Drive, South Beach/Breakwater Hotel, Espanola Way, and Lincoln Road.

We’re well set up for group dining, so bring the whole festival-going (or masquerading) party to Havana 1957 during the Carnival proceedings.

Keep that revelrous Carnival spirit alive with a visit to Havana 1957, where you’ll have some of the very best Cuban eats and drinks in South Florida on hand. Come celebrate with us this October!